All Collections
How to's
How to use the Asset Proposal Workflow

How to use the Asset Proposal Workflow

Accounts can be configured to allow users to be able to propose new assets, here's how it works. (BETA)

Written by David Vaassen
Updated over a week ago

***THE ASSETS PROPOSALS FEATURE HAS BEEN REMOVED FROM BRANDKIT ***

Brandkit provides a way for Users to propose (request) that New Asset(s) be produced and added to the library.

This is a new advanced and optional paid feature released late February 2018.

Why does it exist ?

This is a great way enable your users, use the power of the crowd, to either propose/suggest assets, that might be missing, request a localisation of an exisiting asset, to suit say a foreign market with different language requirements, or propose a new asset that is similar to and exisiting asset.

All three of these situations is handled by the Asset Proposal Workflow.

A user makes a New Asset Proposal  by clicking the Propose New Asset(s) or Propose a Variation button or link (this maybe customised for each account with custom templates ).

In both cases Asset Proposal must be turned on for your account.

Example: Requesting a variation of an exisiting asset

The user is presented with a modal form to complete.

Note: when the Proposal(request) is triggered from an Asset Detail page, it is deemed to be a request for a Variation of the current Asset AND the Asset is associated with the Proposal from that moment on (and is shown in the Form and the resulting Proposals listing).

The Proposal Form can be customised to some degree, 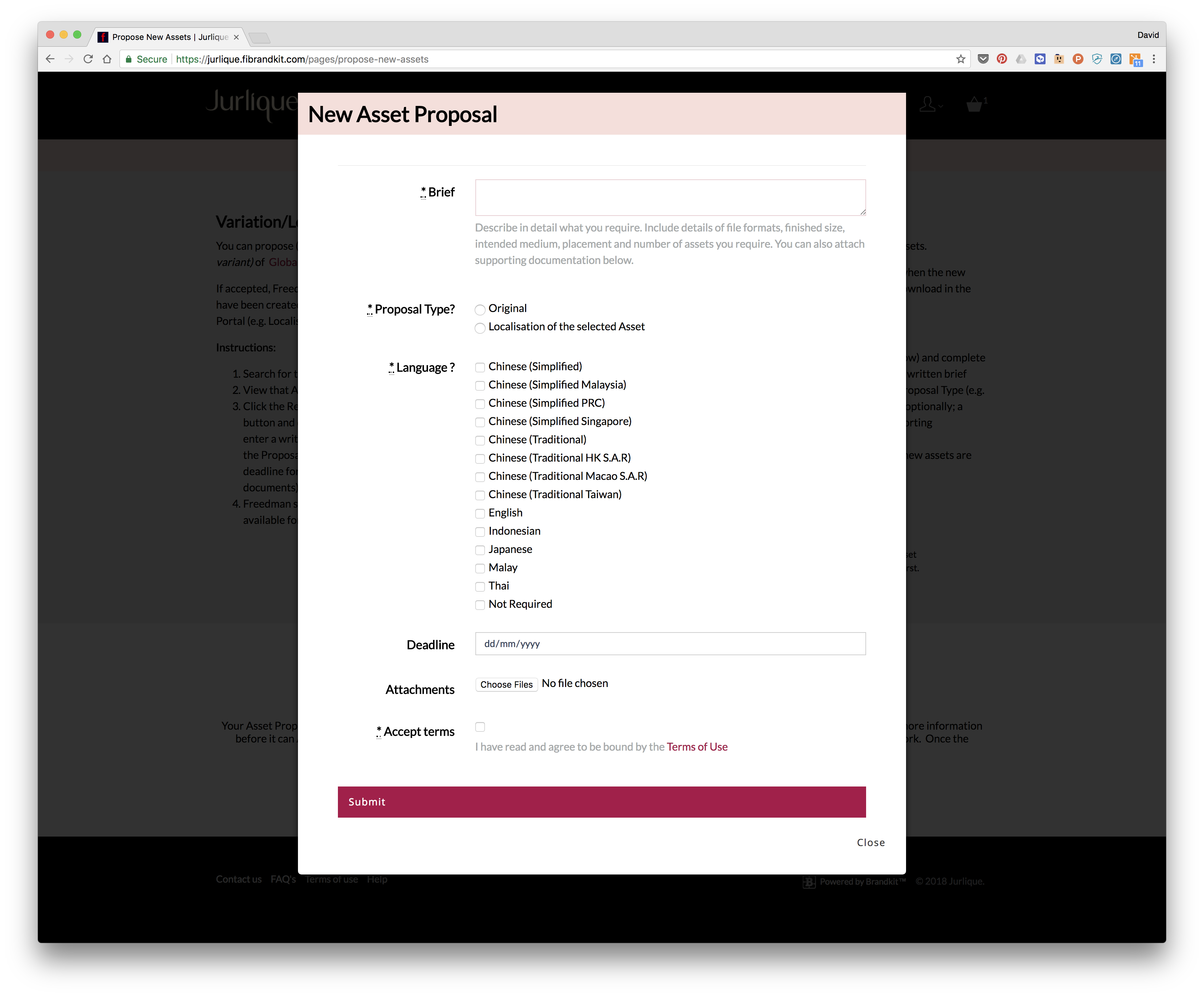 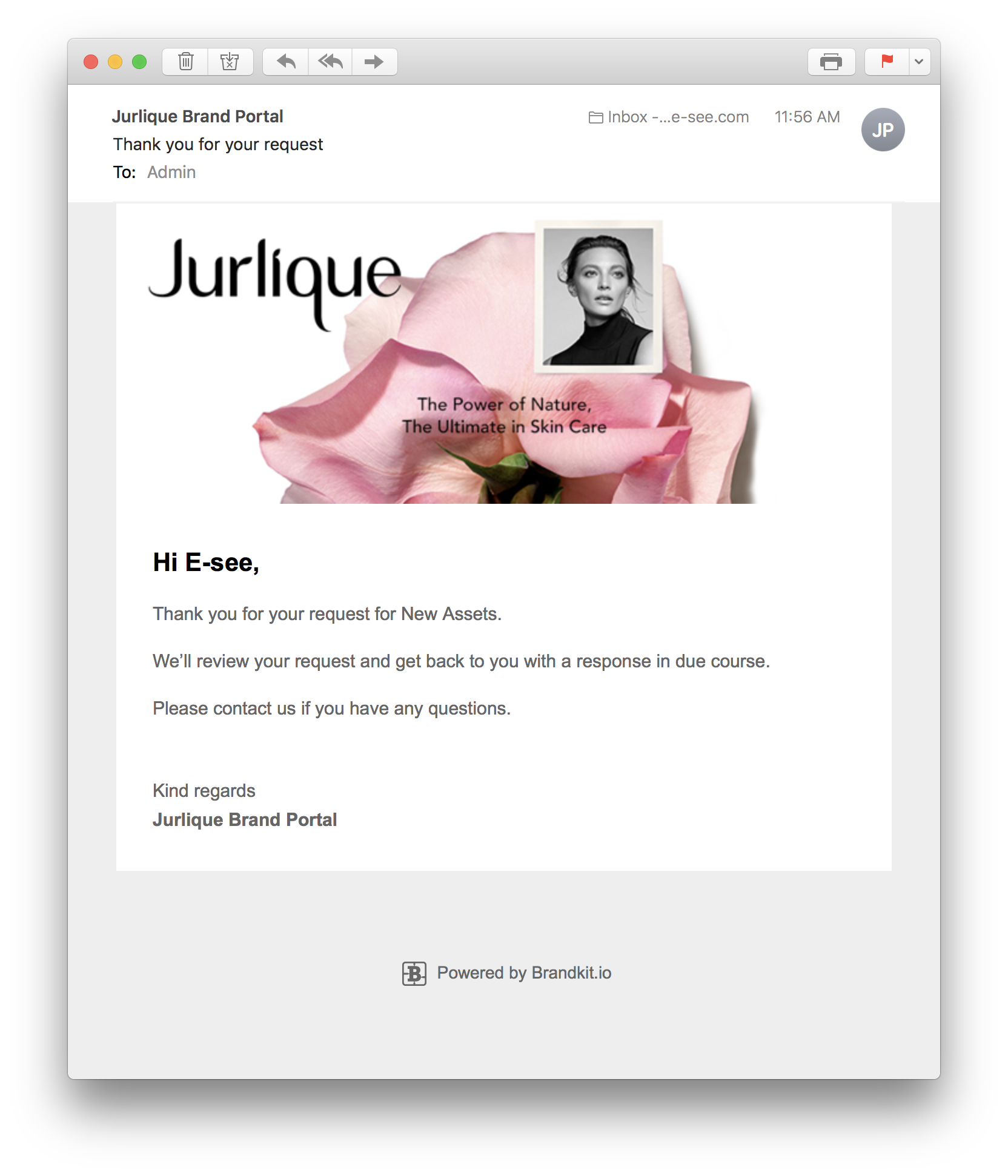 Admins (and other Roles with the Manage Proposals ability) are notified by email and a To Do task is added to their menu in the Brandkit Admin interface.

Admins click a link in the notification email or navigate to  Users > Proposals to view the current Proposals. 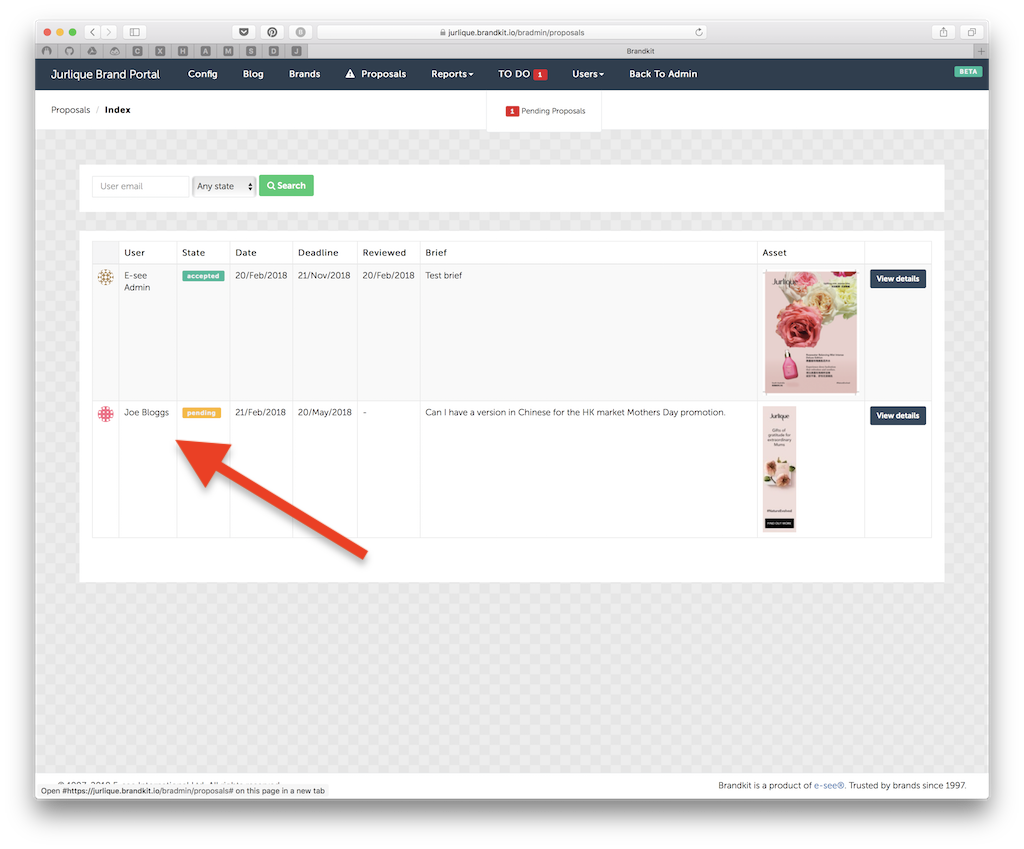 Once an Admin Accepts or Declines the Proposal (Phase 1 of this feature), the displayed state of the Proposal is changed to one of either, Accepted or Declined.

The Proposal is now considered answered or processed and the To Do (or Task) is cleared. The Proposal and all past Proposals are now accessible from the Users menu (Users > Proposals). 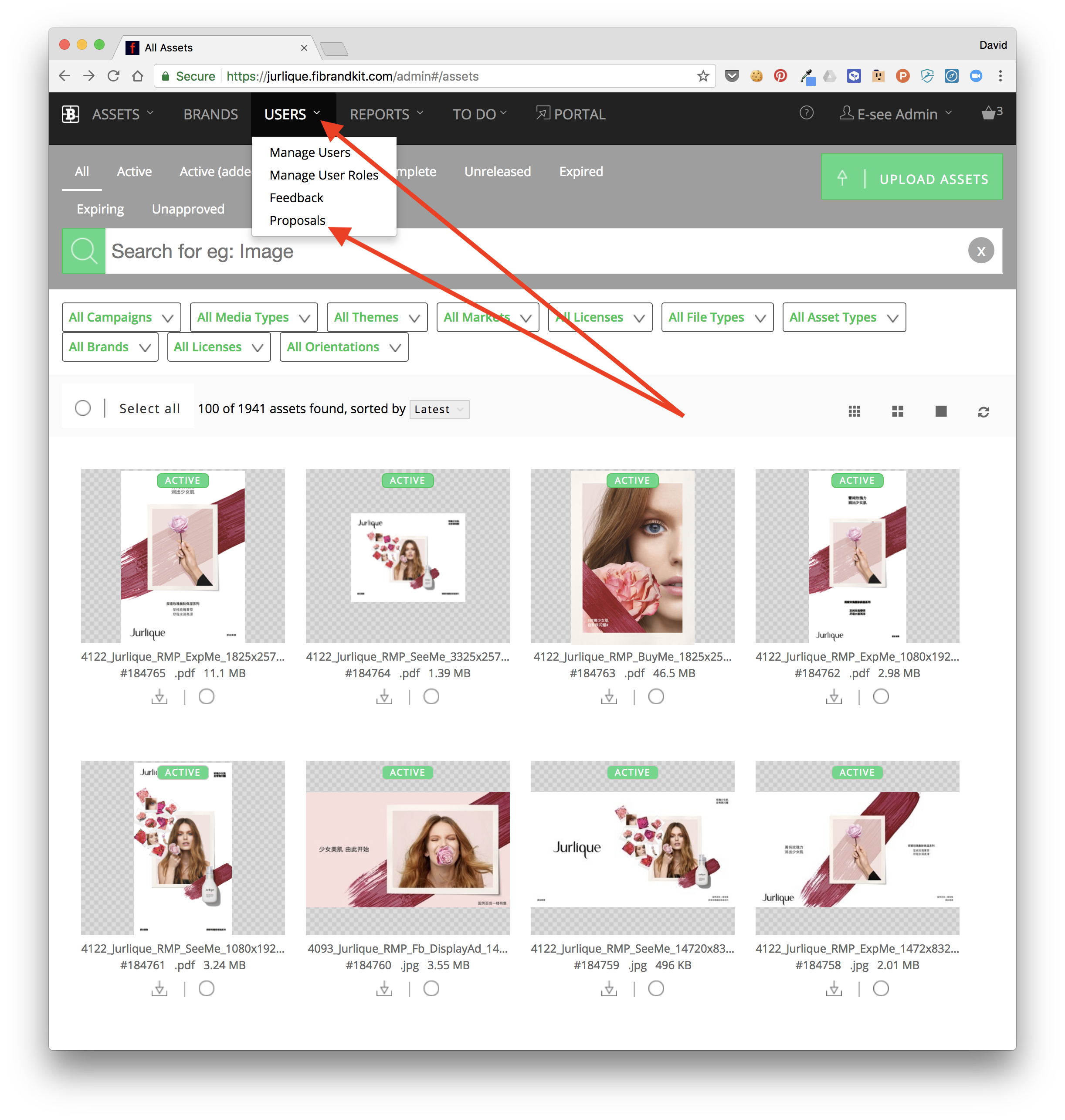 An email is then sent to the requesting user with the response, Accepted or Declined (example email can be seen below). 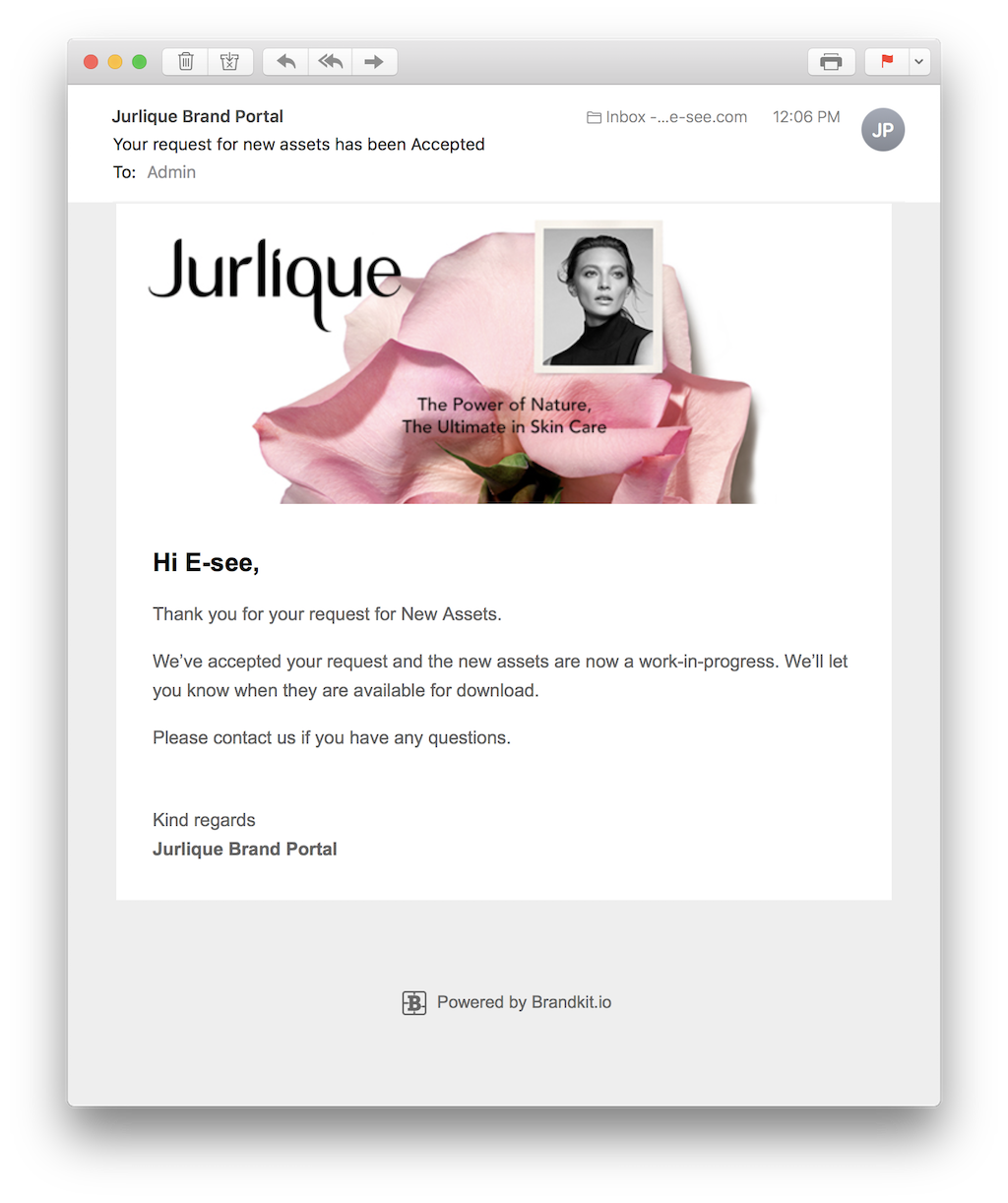 Account Admins are then responsible for ensuring the new assets are created and uploaded to the account in the normal way. This workflow should be handled by your company or agency, as you would normally - Brandkit doesn't get involved in your internal workflows.

Once any new assets that derive from the proposal are ready, an Admin should upload these new assets to the Account, and share those assets with the original requesting user using the Brandkit Share process (or any method that suits you).

An Admin should then navigate back to the original proposal and mark it as Complete.

The To Do task will now be removed and the Proposal marked as Completed in the Proposals list.

In Phase 2 of this feature (coming soon)

When Proposals are accepted, the work will be able to be allocated to external creative suppliers and workflows via an API.

Did this answer your question?